I recently came across a number of SSISDB databases (on SQL Server 2012 instances) configured with the default log retention settings. While this might not seem like a problem, on a system hosting a considerable number of packages, where some of said packages are scheduled to run multiple times a day or more, the amount of logging can easily add up to consume a significant amount of disk space.

This can be remedied very easily by reducing the Retention Period from the default of 365 days to one that complies with your requirements. 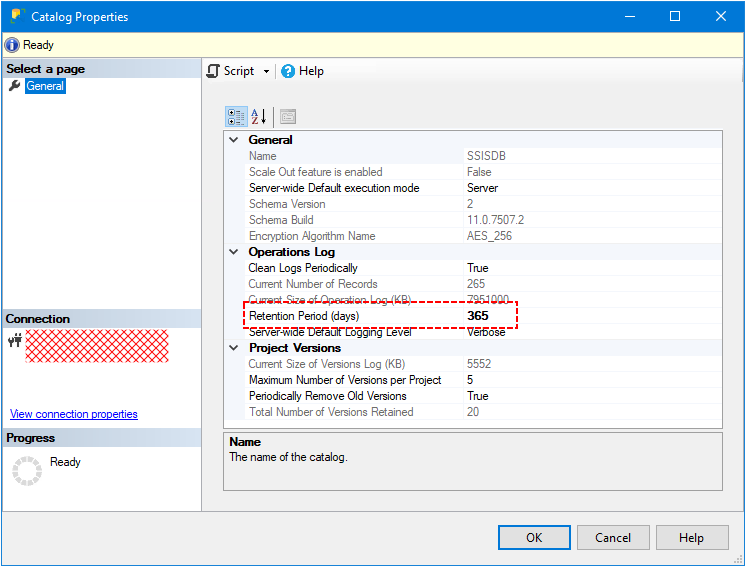 NOTE: In the following examples, the Retention Period is reduced to 32 days.

Reducing the Retention Period can be achieved using the UI, or (my preferred method) using the following TSQL code:

Once the Retention Period is set, the SQL Agent job “SSIS Server Maintenance Job” will handle maintenance tasks. One of the jobs steps will execute the [internal].[cleanup_server_retention_window] stored procedure which retrieves values from the [catalog].[catalog_properties] table, runs a number of checks, then runs a DELETE command on the [internal].[operations] table. The SQL Agent job is scheduled to run daily at 00:00, so what is described next happened when nobody was around.

Of course all the available disk space was consumed, and the process failed.

After reviewing the stored procedure definition, and running the code parts separately to debug the variable values, the problem was found to be in the actual DELETE operation. The code is written so as to delete in batches, however the value of the @delete_batch_count variable is hard-coded (ugh!) with a value of 1000 in the stored procedure code. Although this might seem like a low-enough value for deletes, I was wrong to think so.

The Execution Plan for this DELETE operation showed that a number of other objects were involved.

Although this technique allows the data to somehow “maintain itself”, in my opinion this is a form of lazy programming where the Developer didn’t want to bother with deleting dependent records before deleting the main one.

The scenario wouldn’t have caused any issues on smaller databases with a few hundred records (a classic “works on my machine” example), but on a larger database with hundreds of thousands of records in the [internal].[operations] table, things did not go as intended.

Once the root cause was identified I got on to writing code to, first delete a single record and get the timings, then increase the batch size to an acceptable level. Spoiler Alert: The “sweet spot” value was found to be 5.

Check open transactions (in yet another SSMS session)

Hope this saves you some trouble!